The field of unmanned security is teeming with technological advancements and innovation. The technology was conceptualized to overcome the shortcomings present in human security. Unmanned devices like automated doors, unmanned air vehicles (UAVs), self-driving cars, etc. are proving to be more efficient than their human counterparts. Unmanned devices are cost-efficient, tireless, and work on set parameters and thereby are unbiased as opposed to their human counterparts. They significantly reduce the number of human resources required from a few guards to just a single authorized operator. Among all the unmanned devices, applications of drones for security purposes have been pervasive.

Drone technology has not only infiltrated the field of security but has also become one of its primary assets. They provide 360-degree coverage of an area, and their intelligent analyzing activity helps detect and locate potential threats and track terrorists. Footage from drones helps government officials track insurgent groups and shut down their operations. They provide a 3D perspective to terrains during reconnaissance, showing vulnerabilities that could otherwise be missed. Security officials use drones for perimeter surveillance, as well as monitor roofs and high places. They have also known to be instrumental in emergency and relief situations like hurricanes and fires in Chicago.

However, along with benefits, Drone technology poses significant challenges as well. One of the major challenges with drones is the issue of security. Even after such advancement, drones are still vulnerable to cyber-attacks. They have been known to send sensitive information to rival countries. Along with data thefts, loss of control due to hacking or signal interference is also a prevalent issue. Their limited battery life can hinder even sensitive operations in crucial times. Air traffic management systems face problems being unable to distinguish between manned air vehicles and unmanned ones due to poor traffic management, especially in areas with high air traffic concentration.

Despite the challenges, the UAV industry is still growing and continuing to be incorporated in various applications. According to the Federal Aviation Administration (FAA), the total number of authorized drone operators has already outnumbered the number of registered manned aircraft. Experts at Ohio University estimate that by 2020, almost 7 million small UAVs will be active in the airspace system. Debates about the implementation of DroneID are fiercely raging as it is highly crucial for Unmanned Traffic Management (UTM). Combining AI and machine learning with drone technology can help identify quality defects and malfunctions at much faster rates. Integration of Geographical Information System (GIS) with drones shall improve them significantly for surveillance and reconnaissance.

With so many advancements on the horizon, it becomes difficult for businesses to select the correct organization in a vast sea of solution providers to meet their unmanned security needs. To help them make a sound decision, Enterprise Security Magazine presents the Top 10 Unmanned Security Solution Providers. 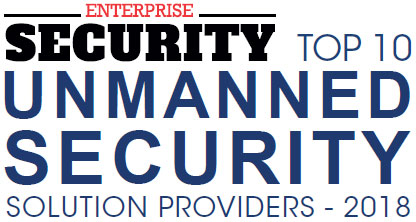 Our subscribers nominate the companies with whom they have collaborated and gotten results. If you think there is a company that deserves to be on our upcoming prestigious annual list of Top 10 Unmanned Security Solution Companies , please write to us about them and the reasons you think they need to be on the list

Your nomination request for upcoming annual list of "Top 10 Unmanned Security Solution Companies " has been Successfully Sent . We will be in touch with you shortly.