Dana Wheeler, Founder & CEO
Unmanned Aerial Systems(UAS) that are involved in mission-critical and functionally specific tasks pertaining to security assurance and threat screening must include unique features in terms of sensors, operating platforms, or payloads. Buying a purpose-built drone is significantly better when performing tasks involving national security and risks. There are many low-cost drones available from various manufacturers across the globe, but not all can be trusted when it comes to intelligent and national security services. Trustworthy drone manufacturers are critically needed, and Plymouth Rock Technologies (PRT), with over a century of cumulative experience, understands security screening and threat detection better than most players in the market.

The company has developed exclusive Intellectual Property(IP) to address the growing challenges in security screening and threat detection space. The company’s drones—among other unmanned security offerings—demonstrate advanced features like transponder collision avoidance for controlled airspace and rogue incoming aircraft detection and is wholly built at the Plymouth Massachusetts Facility in the USA by sourcing components from NATO coalition sources and USA software.

“What transpired since the inception of PRT is a UAS that has outperformed anything available for the commercial and law enforcement focused applications in every aspect,” says Dana Wheeler, CEO & Founder of PRT.

Unlike other security service providers who still work on the somewhat obsolete X-ray scanning technologies, PRT leverages a compact, RF sensor-based UAV called Millimetre Remote Imaging from Airborne Drone (MIRIAD). The device is optimized to be used in outdoor areas to detect hidden weapons or suicidal firearms concealed by any person. By using AI and AR techniques, the company’s offerings can identify threats and their exact location.

“Rather than our critical agencies juggling with DSLR cameras held on by rubber bands and fixing weights with crazy glue to balance out a drone in flight, we have created a world-class UAS platform,” adds Wheeler.

“The company’s drones outperform its competitors in terms of SWAP (Size, Weight and Power), safety, propulsion redundancy, thermal capacity, and camera to support US government and military operations.”

In addition to drones, PRT also provides other threat detection solutions such as the Wi-Ti or Wireless Threat Indication and the Shoe Scanner. The former is a wall or portal mounted sensor system that detects concealed threat devices and has a wide area of coverage. It is a cutting edge technology where the reflected Wi-Fi signals are compared to identify threat items that are kept concealed. The Shoe Scanner is a floor-mounted device that can detect weapons, substances, or any other electronic devices inside the shoe through a 3D imaging technology. These systems can be installed in multiple boarding and check-in points (at say, airports) to speed up the security process and reduce the threats considerably.

The company’s covert scan techniques and stern security practices have helped them to be a part of many high-risk tasks. Recently PRT was actively engaged in a five days presidential protection program where their UAS executed the 4K video and thermal monitoring in an overly populated and high rise city. Along with performing military and intelligent operations, the UAS is also utilized for object recognition technologies, and to identify a leak or structural issue by detecting cracks, corrosion, vapours and irregular heat escapes spots. Along with handling major national and international projects, team members of PRT have been responsible for Military RADAR innovations, NASA communication technologies, counter-terror technology deployed at three FIFA World Cup soccer Tournaments, and designing the CCTV command and control capability for the past three Olympic games to name a few.

Looking towards the bigger picture, the company is preparing to grow both in terms of capability and team members and currently operating in the acquisition cycle. The next step of the company is to complete Wi-Ti provisional patents and move towards payload testing and demonstrations with customers. 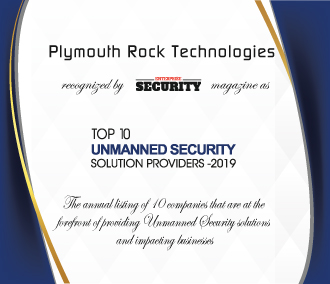 "What started out as a simple drone platform to test our threat detection sensors has evolved into a state-of-the-art UAS from a performance, operational and safety perspective," stated Dana Wheeler, President and CEO of Plymouth Rock Technologies. "Intelligent drones with advanced sensor and detection technologies have long been confined to billion-dollar military programs that require tremendous logistics and inter-agency collaboration."

"The prototype of the PRT-X1 was recently used by law enforcement and security agencies in the United Kingdom (UK) for a presidential protection detail over a five-day period," stated Carl Cagliarini, Vice President Business Development. "The UAS successfully completed key assigned tasks over five days, including night operations in inclement weather conditions."

PRT is in consultation with several agencies in Washington D.C. to enable law enforcement and rescue service agencies to acquire the PRT-X1 via the GSA (General Services Administration) and other associated US Government approved operational lease and purchase programs.